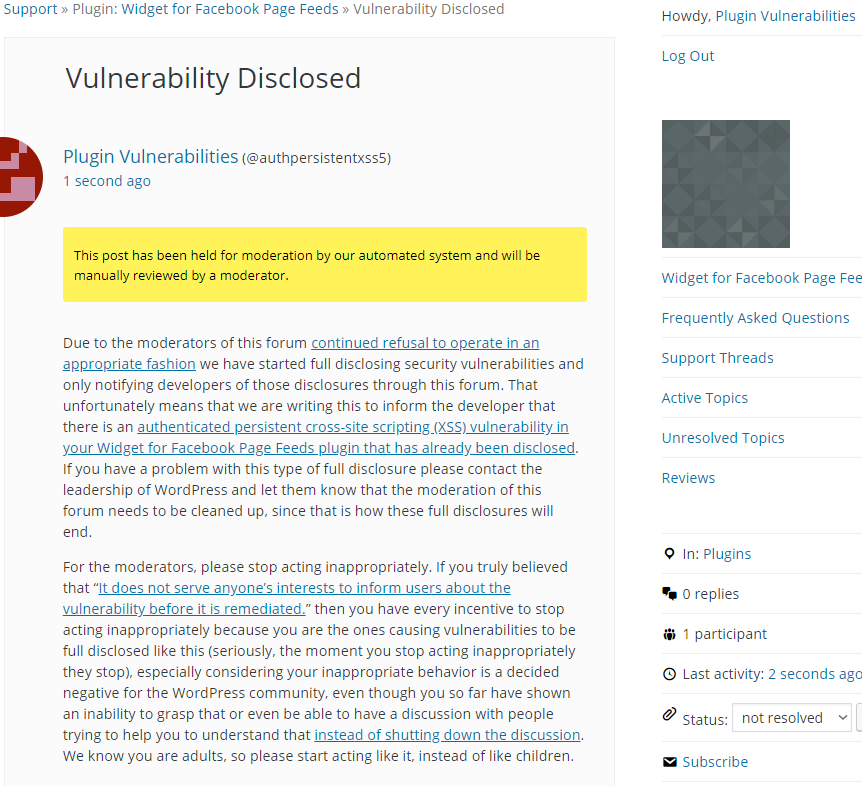 The plugin Facebook Widget (Widget for Facebook Page Feeds) was closed on the WordPress Plugin Directory yesterday. That is one of the 1,000 most popular plugins, so we were alerted to its closure. While we were looking in to the plugin to see if there were any vulnerabilities we should be warning users of the plugin that also use our service, we found that it contains an authenticated persistent cross-site scripting (XSS) vulnerability due to not properly handling the security of shortcode attributes.

The first line of code in that function sets attributes from a shortcode to the variable $defaults without sanitizing the input. For lower level users, WordPress will have already do some sanitization of them, but does not sanitize them for usage as HTML tag attributes. On the last line a number of those are output as HTML tag attributes without being escaped. As the proof of concept below confirms that could be abused to cause malicious JavaScript code to be included on the page, otherwise known as an authenticated persistent cross-site scripting (XSS) vulnerability.

Due to the moderators of the WordPress Support Forum’s continued inappropriate behavior we are full disclosing vulnerabilities in protest until WordPress gets that situation cleaned up, so we are releasing this post and then leaving a message about that for the developer through the WordPress Support Forum. You can notify the developer of this issue on the forum as well. Hopefully the moderators will finally see the light and clean up their act soon, so these full disclosures will no longer be needed (we hope they end soon). You would think they would have already done that, but considering that they believe that having plugins, which have millions installs, remain in the Plugin Directory despite them knowing they are vulnerable is “appropriate action”, something is very amiss with them (which is even more reason the moderation needs to be cleaned up).

Update: To clear up the confusion where developers claim we hadn’t tried to notify them through the Support Forum (while at the same time moderators are complaining about us doing just that), here is the message we left for this vulnerability:

If you are reading this post down the road the best way to find out if this vulnerability or other WordPress plugin vulnerabilities in plugins you use have been fixed is to sign up for our service, since what we uniquely do when it comes to that type of data is to test to see if vulnerabilities have really been fixed. Relying on the developer’s information, can lead you astray, as we often find that they believe they have fixed vulnerabilities, but have failed to do that.