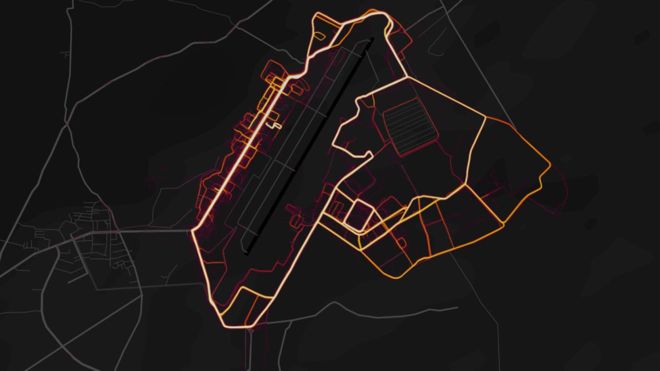 Security concerns have been raised after a fitness tracking firm showed the exercise routes of military personnel in bases around the world.

Online fitness tracker Strava has published a “heatmap” showing the paths its users log as they run or cycle.

It appears to show the structure of foreign military bases in countries including Syria and Afghanistan as soldiers move around them.

The US military was examining the heatmap, a spokesman said.

How does Strava work?

It uses the collected data, as well as that from fitness devices such as Fitbit and Jawbone, to enable people to check their own performances and compare them with others.

It says it has 27 million users around the world.

What is the heatmap?

The latest version of the heatmap was released by Strava in November last year.

It is a data visualisation showing all of the activity of all of its users around the world.

Strava says the newest version has been built from one billion activities – some three trillion points of data, covering 27 billion km (17bn miles) of distance run, jogged or swum.

But it is not a live map. The data aggregates the activities recorded between 2015 and September 2017.

So why is it in the news now?

That is thanks to Nathan Ruser, a 20-year-old Australian university student who is studying international security at the Australian National University and also works with the Institute for United Conflict Analysts.

He said he came across the map while browsing a cartography blog last week.

It occurred to him that a large number of military personnel on active service had been publicly sharing their location data and realised that the highlighting of such exercises as regular jogging routes could be dangerous.

“I just looked at it and thought, ‘oh hell, this should not be here – this is not good,'” he told the BBC.

“I thought the best way to deal with it is to make the vulnerabilities known so they can be fixed. Someone would have noticed it at some point. I just happened to be the person who made the connection.”

What does the heatmap show?

Although the location of military bases is generally well-known and satellite imagery can show the outline of buildings, the heatmap can reveal which of them are most used, or the routes taken by soldiers.