Do something different with your PC, smartphone, laptop and desktop

No Windows, no Linux, no macOS: is there really a desktop operating system that’s worth using outside of the big three? We’ve set out to answer that question, and while there are no absolute definitive answers here – everyone’s use case is different, after all – we’ve discovered ten distinct examples that fall outside the usual bounds.

There are descendants of UNIX, OS/2, BeOS and DOS, and operating systems which take inspiration from platforms as diverse as AmigaOS and Windows NT. Our list even includes a few true outsiders, independent operating systems built from the ground up which serve mainly to prove just how difficult it is to create an entire functioning OS without a large number of brains working on it.

Everything here can be tested reasonably within a virtual machine, so if something grabs your interest don’t hesitate to download and give it a try.

OS/2 may not have set the world on fire, but it actually maintained a decent industrial and commercial install base long after its desktop aspirations died. eComStation is a derivative OS that uses classic OS/2 technologies on modern hardware.

It’s not free – packages start at £215 (around $285, AU$375) for a fresh installation down to £60 (around $80, AU$105) for an upgrade from the previous version – but eComStation isn’t necessarily meant for the desktop. Much like its ancestor it’s been developed with security and stability in mind for commercial applications. There’s a demo available, so you can at least try it before you invest.

We see the claim ‘zero downtime’ repeated all over the place, and while it’s theoretically possible to lock up your hardware with the wrong application, this is something that could be a real killer feature.

There’s a host of open source software ported to eComStation including Firefox, OpenOffice, VLC and more, and it’s capable of running DOS, Java and OS/2 applications. You almost certainly don’t need it, but if there’s something system-critical and OS/2-only that your business relies on, running this on bare metal is a much more reliable idea than setting up a VM. 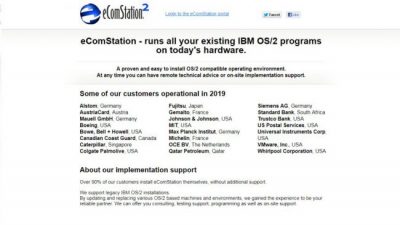 We’re a bit sad that BeOS didn’t take off. A stylish multitasking OS that introduced a whole host of features that Windows, Linux and macOS would later adopt for their own, BeOS was a true multimedia innovator that left the market with a whimper when its rights were sold to Palm in 2001.

Despite being closed source, the spirit of BeOS lives on in the form of Haiku, an open source re-implementation which began development immediately after Be’s demise, and it has been developed since.

Built as open source software from the ground up but designed to be backward-compatible with its classic quarry, Haiku follows BeOS’ lead in its entirely modular design, allowing different components of the OS to be developed concurrently. It last saw a major release over three years ago, but you can try nightly builds to test out current developments.

It’s worth playing with just for the cleanness of its desktop, and there are working web browsers and media players, although it’s still rather experimental and many of the features of BeOS haven’t quite been fully realized as yet. 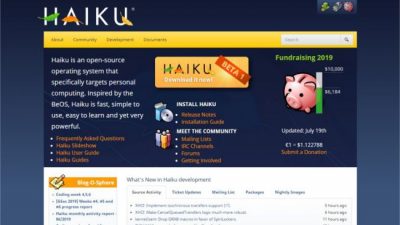 Linux, as you may know, is a ground-up reinterpretation of UNIX. ReactOS does the same for the Windows NT architecture upon which all modern Windows versions are based. It’s completely open source, using no proprietary Windows code, yet ReactOS is designed to be (and in some cases actually is) compatible with Windows drivers and applications.

Your mileage may vary – it’s certainly not going to play nice with high-end games or software, and ReactOS isn’t quite up to the Windows 10 level yet. It’s currently aiming at full compatibility with Windows Server 2003.

So it’s clearly a bit behind the times, but ReactOS does have its uses. Incorporating parts of noted Windows emulator Wine, it runs LibreOffice, Firefox, Opera and more quite happily, and can even manage (earlier) commercial applications like Adobe Photoshop.

Given that it’s free, it’s certainly worth a test to see if any of your older business-critical applications are compatible – setting up workstations without Windows licensing is a tempting prospect, although we can’t vouch for its resistance to attacks… 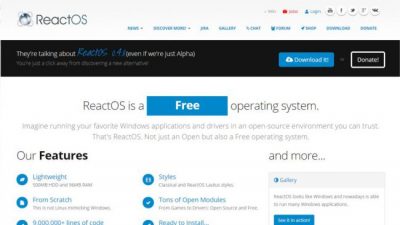 A ridiculous amount of business software relies on MS-DOS, even to this day. We’re still seeing bespoke, newly-developed text-mode apps that run directly from the shell, probably because the complexity and potential for disaster that graphical interfaces add to the mix is not worth the risk in situations that demand 100% uptime.

That business-critical software may rely on MS-DOS, but it doesn’t have to know you’re actually running FreeDOS. It’s an entirely compatible but completely free and open source remake of DOS that can handle just about everything its predecessor can do. That does, of course, mean no multitasking, no protected mode, no GUI, but it’ll run your games and can even manage Windows 3.1 as long as you’re running it in standard mode.

As you might expect, it’s not a static recreation of the final commercial DOS release in 1995, and indeed hasn’t been static since FreeDOS first emerged in 1998. In fact, FreeDOS remains in active development, and features a number of integrated improvements compared to its rather archaic ancestor. 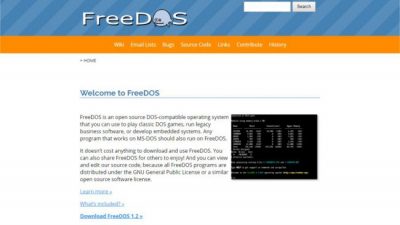 We’re cheating a little, here, seeing as Chrome OS is built upon the Linux kernel, but it would be a shame to ignore Google’s operating system on a technicality. Besides, when using Chrome OS you essentially run an expanded version of the Chrome browser and nothing else. Yes, you can drop to a terminal if you know how, but the desktop itself is a pure feat of HTML5 wrangling.

It’s testament to the maturity of the web that there’s not a huge amount you can’t do with Chrome OS, at least as long as you know where to look online. And it’s not an OS that’s exclusive to Chromebooks, either – you can build a version of Chromium OS (the open source development from which Google gleans its final code) on top of Ubuntu 14.4 then install it on your own hardware.

One of the more professionally assembled operating systems on this list, Chrome OS is good for an experiment, and a solid choice if you’re handing a laptop to someone who’s likely to break any other OS. But perhaps it’s a bit limited for production use. 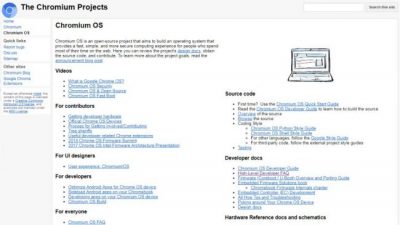 While Linux is a recreation of UNIX, FreeBSD is more of a continuation. It was initially developed by students working from a Research Unix source license obtained by the University of California Berkeley – the ‘BSD’ bit stands for Berkeley Software Distribution. The only reason it’s not called BSD Unix is that pesky trademark and licensing gremlin.

The OS runs on its own kernel, and all of its key components have been developed as part of a single whole. Linux, on the other hand, is just the kernel; the rest of it is supplied by third parties so it lacks BSD’s overall coherency.

This is a highly complete and very reliable operating system, perfect both for server applications and desktop use. That said, it doesn’t come with a GUI by default – the X-window system is thankfully straightforward to install, and there are ports of Linux window managers like Gnome and KDE available.

One final note: BSD forms the core of perhaps the most polished and stable desktop operating system out there in macOS, so you know you’re in good hands here. 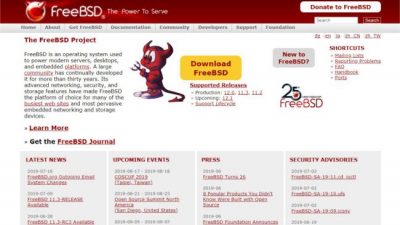 Sun Microsystems’ SunOS – which evolved into the rechristened Solaris – began as a proprietary UNIX distribution designed to support Sun’s SPARC processors. Its hardware reach widened as it grew, and in 2005 Sun released the source code in the form of OpenSolaris, leading to advanced community development. And then Oracle purchased Sun, renamed the OS once more to Oracle Solaris, and decided to cease source releases, effectively closing the source once again.

That’s a long story made much shorter, but it’s a good explanation of exactly what Solaris offers: long development, a period of community improvement, and the backing of a large tech company that makes it perfect for systems with high demand and support requirements. You can download and use it for free, although the license terms state that you’ll need a support contract from Oracle if you wish to use it commercially.

Solaris installs with a version of the GNOME desktop by default, and there’s built-in support for Linux binaries if you need to extend it further.

Whether the extreme religious doctrine behind it interests you or not, our final selection is an interesting example of a completely independent, unique OS. It’s been made and maintained with extreme dedication by one man, Terry A. Davis, over the course of ten years.

TempleOS – programmed entirely using Davis’ own language, the excellently named HolyC, which you also use to interact with its shell – deliberately includes no networking and absolutely no hardware support beyond that which forms the core PC system. So what’s the point?

TempleOS has been built from the ground up with what seems like no hang-ups on existing operating systems. The entire thing is hyperlinked, meaning you can quickly burrow down to the source of a program just as easily as you can find its dependencies, and it’s super-quick; there’s no paging, so the whole OS gets up and running within a second or two.

It’s unlikely you’ll be able to use TempleOS for anything solid, and Davis’ well-documented mental health struggles haven’t helped its standing in the community. But it includes a huge number of interesting ideas, particularly the blurring of the division between document and program, which could impact more traditional operating systems. Check out Davis’ quick tour of the OS below to see what it’s all about in more detail. 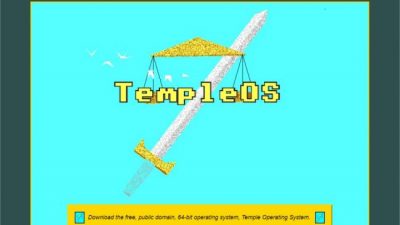