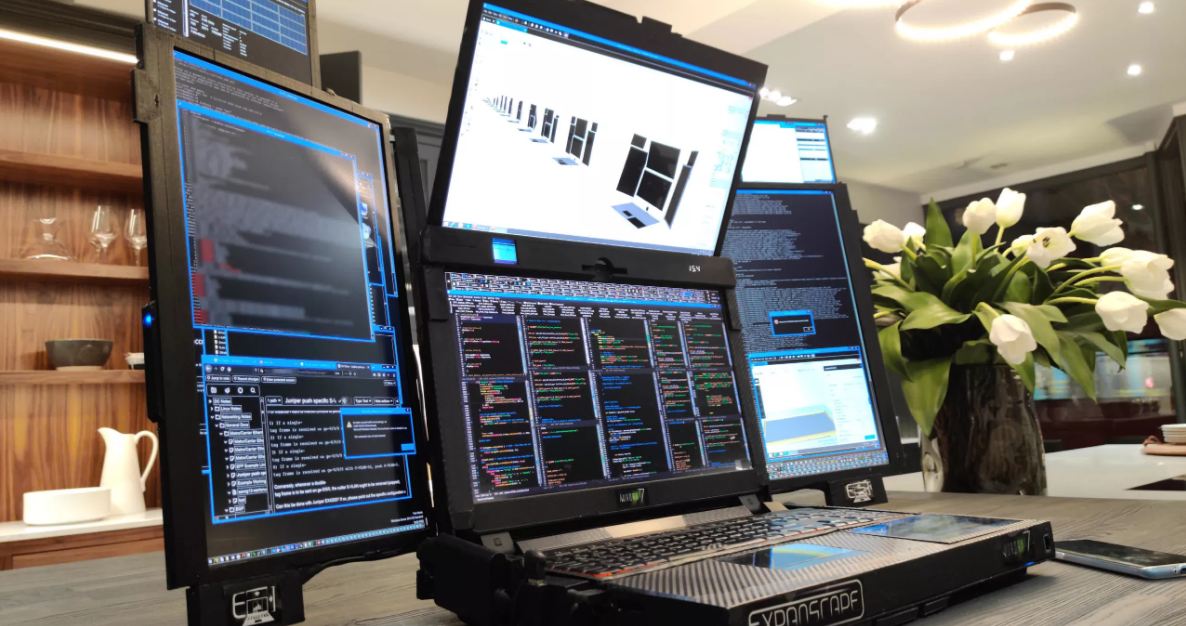 Need more than a single laptop screen? This one has seven!

We’ve seen laptops with two, even three screens before, but what if your profession requires access to a multitude of displays while on the move? You turn to Expanscape, which has developed the world’s first seven-screen laptop.

You might remember Razer’s Project Valerie that we first saw back at CES 2017. Based on the Razer Blade Pro, the laptop incorporates three 17.3-inch 4K G-Sync compatible monitors that automatically extend from the central display and angle themselves toward the user.

As spotted by Tom’s Hardware, Expanscape’s Aurora 7 Prototype more than doubles the number of screens found in Razer’s laptop to seven. That includes four 17.3-inch displays—two in landscape, two in portrait—and three 7-inch 1920 x 1200 screens, all of which fold out from the device itself, meaning no fiddling with external connections. It even comes with a mini display that shows system status info and user-configurable content.

Expanscape writes that the Aurora 7 is aimed at DevSecOps, Security Operations, Data Scientists, and Content Creators. It’s no slouch when it comes to the internals, either: a Core i9-9900K CPU, 64GB of DDR4-2666 memory, GeForce GTX 1060 graphics card, two PCIe 3.0 x 4 M.2 SSDs, one 2.5-inch MLC SSD, and a 2TB 7200RPM hard drive. It’s even got an embedded programable Arduino microcontroller.

As you might imagine, the Aurora 7 requires quite a bit of power for all those screens. That comes from the two internal batteries squeezed into the chassis: the primary 82Wh battery is for the system, while the 148Wh secondary battery keeps the screens going. They still won’t keep the laptop alive for very long—about 2 hours 20 minutes, or less at high clock speeds.

Expanscape says it will be selling the prototypes of its machines while they are being developed. No word on prices, but a seven-screen laptop isn’t going to come cheap.