The new MacBook Air (2019) is here after a tumultuous few years for Apple’s thin and light MacBook. The MacBook Air used to be the most affordable way to get a MacBook, but then it appeared to fall out of favor as Apple re-positioned the 12-inch MacBook as both the thinnest and cheapest of its laptops.

However, in a rather surprising move, Apple has ditched the 12-inch MacBook line while releasing a refreshed MacBook Air for 2019. 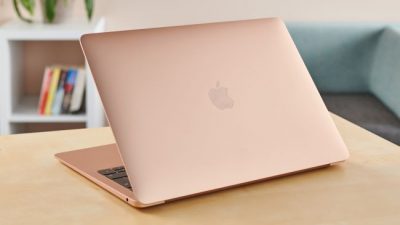 So, with the MacBook Air back in what many people consider its rightful place as the most affordable Apple laptop, will this year’s model be able to bring Apple’s vaunted design and build quality to a new audience who are put off by the MacBook Pro’s high price?

While that’s still far from budget territory, it makes the MacBook Air more affordable than ever, and it’s always nice to see prices going down with updates – rather than up.

That basically means you’re getting 128GB more for $200/£200/AU$300, which is a pretty costly upgrade. It’s a bit frustrating that Apple has kept that big leap in price for a relatively small amount of extra storage space. Meanwhile, you can double your iPhone XR storage for another $50/£50.

It makes much more financial sense to get the 128GB version, and then either invest in an external hard drive (check out our pick of the best external hard drives for Macs for suggestions), or use cloud storage like iCloud to save your files.

As is unfortunately the case with Apple’s hardware, there’s no easy way to open up the MacBook Air yourself and upgrade the SSD.

So, while we’re pleased to see the price drop for the MacBook Air, shipping a premium – and while the Air is the cheapest MacBook, at this price it’s still premium – laptop with just 128GB of storage seems pretty mean in 2019 – especially when Apple then charges so much for a storage upgrade.

One of the biggest threats to the MacBook Air (2019) is that Windows laptops are now thinner and more powerful than ever. Apple no longer has the monopoly on thin and light laptops, and there are Windows-based Ultrabooks that offer similar (or better) specifications for the same price. And, you can guarantee that they all have bigger hard drives than 128GB. For example, the HP Spectre x360 (2019) is around the same price and offers 256GB storage and a much faster processor.

The lower entry price of the MacBook Air (2019) is certainly welcome if you’re set on buying a MacBook, but some of Apple’s less appealing habits are still evident, and with increased competition from Windows laptops, there are much better value options out there. 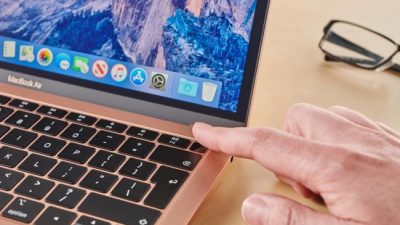 As with the new MacBook Pro (2019), Apple has not changed the outside design of the MacBook Air (2019) from last year’s model.

Great news if you love the design of the MacBook Air, but bad news if you were hoping for a more substantial change.

It also feels robust and solid, so even though it’s thin, you’re not worried about it getting bent or dented. This is thanks to the MacBook Air being built out of an aluminum alloy that looks great and feels sturdy. By keeping the same design as last year’s model, the new MacBook Air (2019) is once again made out of 100% recycled aluminum – which means that no new metal has been mined to create this device.

That’s a big selling point for anyone concerned about the environment, and something we commend Apple for.

However, by keeping the same design, it means this year’s model still features elements we weren’t too fond of with 2018’s edition

The fact that the MacBook Air only comes with two Thunderbolt 3 ports is frustrating but understandable, considering the svelte design of the laptop. However, Apple’s decision to put both ports on the left hand side baffled and annoyed us in 2018 – and it continues to do so in 2019.

If one port had been placed on each side, it would have given people a bit more flexibility when charging the MacBook Air. Instead, you always need to sit in a certain position with the power adapter plugged into the left of the laptop.

It also makes the MacBook Air feel a little cluttered – and unbalanced – if you plug in two (or more if you have an adapter) devices into the Thunderbolt 3 ports.

One area where Apple has made a change – and a welcome one at that – is with the keyboard. The new MacBook Air (2019) now uses the improved third-generation Butterfly keyboard that came with this year’s MacBook Pros.

Previous versions of the MacBook keyboards using older Butterfly switches were prone to problems such as sticky and unresponsive keys. Apple has taken a lot of flack for this – unsurprisingly, as when you’re spending a lot of money on a laptop, you’d expect the keyboard to work.

The controversy has been a stain on Apple’s usually impeccable reputation for quality control and reliability. The updated keyboard is aimed at making it less likely for there to be issues – however some people will inevitably think that this doesn’t go far enough. When spending this kind of money, ‘less likely to go wrong’ won’t cu

David Attenborough’s Unending Mission to Save Our Planet

WE MAKE LOTS of programs about natural history, but the basis of all life is plants.” Sir David Attenborough is at
Continue Reading >>
September 19, 2022 Leave a Comment Like

The latest report by Disrupt Africa has revealed that a total of 238 tech startups in Nigeria had raised $2.068
Continue Reading >>
September 19, 2022 Leave a Comment Like

Get it Done Quickly! Your rating depends so much on the Business Website You are yet to Build.

You may be happy with the current size of your business, but every company experiences customer turnover. To encourage continued
Continue Reading >>
June 17, 2022 Leave a Comment Like

84% of today’s consumers give trust to the fact that a website makes your business more credible than companies who only
Continue Reading >>
June 15, 2022 Leave a Comment Like

Romance scammers made off with a total of $139 million in cryptocurrency last year, five times more than the amount
Continue Reading >>
February 15, 2022 Leave a Comment Like

David Attenborough’s Unending Mission to Save Our Planet

WE MAKE LOTS of programs about natural history, but the basis of all life is plants.” Sir David Attenborough is at
Continue Reading >>
September 19, 2022 Leave a Comment Like

The latest report by Disrupt Africa has revealed that a total of 238 tech startups in Nigeria had raised $2.068
Continue Reading >>
September 19, 2022 Leave a Comment Like

Get it Done Quickly! Your rating depends so much on the Business Website You are yet to Build.

You may be happy with the current size of your business, but every company experiences customer turnover. To encourage continued
Continue Reading >>
June 17, 2022 Leave a Comment Like

84% of today’s consumers give trust to the fact that a website makes your business more credible than companies who only
Continue Reading >>
June 15, 2022 Leave a Comment Like

Romance scammers made off with a total of $139 million in cryptocurrency last year, five times more than the amount
Continue Reading >>
February 15, 2022 Leave a Comment Like

While Apple’s Keyboard Service Program, which will replace a faulty keyboard free of charge, extends to this year’s MacBook Air, it also suggests that the issue is still persistent. At this point, we hope that the next MacBook Air (and other MacBook models) ditch the clearly problematic Butterfly switch altogether.

As with the previous version, Touch ID is also included, allowing you to log into the MacBook Air with your fingerprint (or pay for stuff using Apple Pay). The larger Force Touch trackpad is also present, and as with last year’s model it feels pleasant to use and works well.

Overall, the MacBook Air (2019)’s design doesn’t change much, which in some ways is a good thing – but it’s also disappointing as well. Hopefully the next version of the MacBook Air will try something as revolutionary as the original MacBook Air was.

Perhaps the most noteworthy change with the MacBook Air (2019) is that the screen now supports Apple’s True Tone technology.

This automatically adjusts the color temperature – most noticeably whites – shown on the screen depending on the ambient light you’re using the MacBook Air in. It can have a pleasing effect (when you first start the MacBook Air (2019) you can toggle the setting on and off to see the difference it makes), and while this setting may not be for everyone, we found it did a nice job of making colors look more natural.

True Tone has been included in MacBook Pros for a while now, and we’ve often thought that wasn’t always the best fit – as MacBook Pros are often used by photographers, video editors and digital creatives who require accurate colors – something that True Tone messes with. However, with the MacBook Air, which is used as a more casual laptop where color accuracy isn’t as important, it makes much more sense.

It’s a nice feature, but probably not one that would cause you to want to ditch your 2018 model for this year’s.

Elsewhere, the screen remains the same – so a 13.3-inch Retina display with 2,560 x 1,600 resolution that offers sharp and vibrant colors. Last year’s model introduced impressively thin bezels around the display, allowing the screen to span almost the entire width of the MacBook Air. The screen has long been one of the best features of the MacBook Air, so we’re pleased that – True Tone aside – Apple hasn’t messed with the winning formula here.