Cisco Builds Custom Silicon To Power The “Internet for the Future” 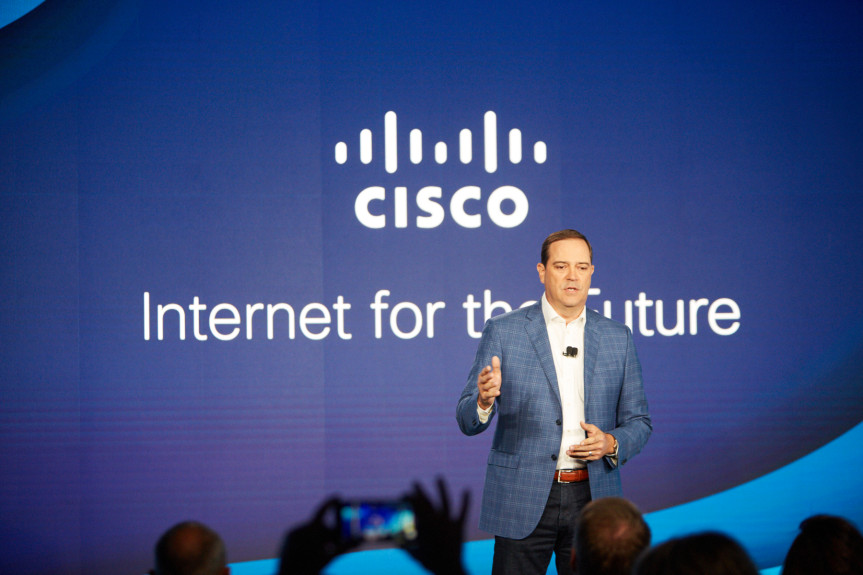 Cisco Builds Custom Silicon To Power The “Internet for the Future”

The scaling demands of the Internet are asking for specialized silicon to meet those needs.

The future of just about everything tech-related right now, or so it seems, revolves around designing custom semiconductor chips. From smartphone makers like Apple and Samsung, to cloud computing providers like Amazon and Google, stretching even to automakers like Tesla, there’s been an enormous amount of effort among tech vendors recently to create their own specialized silicon parts. The most recent example comes from networking powerhouse Cisco.

Cisco unveiled a new silicon platform last week, called Silicon One, that they believe is necessary to power the next generation internet, as well as the infrastructure necessary to support 5G networks.

Based on current growth rates and predicted demand, the amount of data traffic that each of these elements will demand (as well as the obvious tie-overs between them), will completely overwhelm the existing networking infrastructure. Plus, the economics of trying to scale these efforts with existing devices paints an even bleaker future—hence the need to take a radically different approach to networking gear.

To be completely accurate, Cisco has been designing and building networking-specific chips for over two decades. What’s different and significant about Silicon One is that, in addition to using it themselves, the company also plans to sell this chip to service providers and other potential partners who may want to build their own devices. That’s quite a change from a company that was never seen as a silicon supplier.

The other unique thing about the Silicon One platform is the design and functionality of the architecture. Cisco claims that they’ve been working on it for 5 years and started with a clean sheet of paper. When you look at what it’s designed to do, it’s easy to see why. Rather than pursuing enhancements to existing types of traditional routing and switching chips, they decided to create a more programmable structure that would allow a single chip family to perform a variety of different networking-related functions for different applications, including backhaul, core, edge and more. The goal was to achieve new levels of performance—over 10.8 terabits/sec—in a single rack space unit using the Q100 chip and to make the traditionally slower routing chips as fast as those that do switching.

Silicon One achieves this with an architecture that, at first glance, sounds somewhat like an FPGA (field-programmable gate array), which is a completely programmable set of circuits embedded into these chips that are often used in networking devices. Further conversations with Cisco representatives at their launch event in San Francisco last week clarified, however, that the Q100, which is the first specific iteration of the Silicon One family, isn’t an FPGA, but rather, a different type of ASIC (application-specific integrated circuit) design. The Silicon One family of chips (others are still to come) integrates multiple types of optimized networking functions within its design that can be turned on or off with a software API (application programming interface). This allows equipment builders to basically turn on and off various sets of functionalities as needed, depending on the specific tasks the device is intended to do.

While it’s easy to write off something called the “Future of the Internet” as little more than hype, Cisco managed to present a compelling case as to what problems lay ahead with current networking infrastructure equipment, the need for a new approach, and the achievements they made to address those needs.

So, for example, if either Cisco or one of its silicon customers wants to build a device that’s primarily dedicated to high-speed routing, they can enable those functions, whereas someone else building a piece of infrastructure equipment that needs more switching capabilities can turn those on—both with the same chip. According to Cisco, turning on or off certain functions doesn’t change the performance of the chip. The goal was simply to create a single silicon platform that could be more easily used and have software written for, across multiple different types of networking functions, thereby saving the capital costs involved in designing and testing multiple types of systems on multiple different chip architectures.

Speaking of software, the company also unveiled a new version of the operating system they use inside their devices called IOS XR7 (no, not that iOS) that’s been optimized to work with the new silicon. XR7 will work on the new line of 8000-series devices—the first to feature Silicon One-based chips—as well as previous generations going back to the NCS 540, 560, and 5600 lines. The new OS features a number of optimizations designed to allow it to scale to the size and speeds necessary for the next-generation network and to do so in a more automated way that large service and cloud providers, such as Microsoft, AT&T, Comcast and Facebook, need.

The final piece of the Cisco puzzle was the release of new silicon photonics-based advances—also built into the new 8000-series routers—that allow the company to reach the 400G speeds per port that are necessary to power the future Internet. Leveraging several acquisitions that the company made in this area over the last several years, notably Lightwire and Luxtera, Cisco announced important advances in the field that are allowing them to reduce the manufacturing costs for these components by integrating them into more traditional silicon manufacturing processes. Given that the optics costs can reach 75% of the total when scaling to 400G and higher, that’s a critical step. Plus, as with the Silicon One family of chips, Cisco has decided to sell its silicon optics components separately for potential partners who may be interested.

While it’s easy to write off something called the “Future of the Internet” as little more than hype, Cisco managed to present a compelling case as to what problems lay ahead with current networking infrastructure equipment, the need for a new approach, and the achievements they made to address those needs. As with most behind-the-scenes technologies, we may not see the capabilities that Silicon One will bring to both our future wired and wireless connections, but if it’s all done right, we should most definitely experience it.